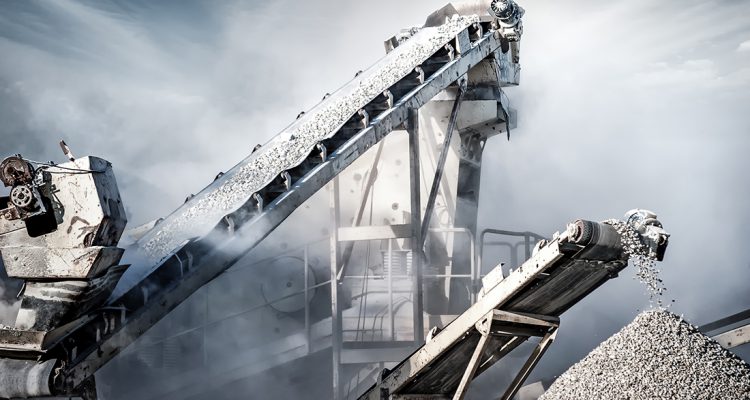 The Hanson aggregate quarry in the town of Molong in central west NSW is an essential resource for the construction industry. It is a leading quarry for the Hanson Heidelberg Cement Group and has been in continuous operation for almost 30 years.

As in all quarry operations, conveying systems are essential to transporting materials across a site. The conveyor machinery, however, is vulnerable to contamination. This in turn, creates an ongoing issue when it comes to the efficiency and productivity of a site – a problem that was occurring at the Molong quarry.

“By its very nature an aggregate quarry is tough on components such as bearings,” explains quarry manager Chris Cooke. “They are generally covered in dust all the time. And each time a bearing or shaft failed meant a couple of days lost productivity while the damaged component was removed and the replacement fitted.”

After experiencing repeated bearing and shaft failures, Cooke sought a solution and reached out to his local BSC branch for advice.

“We were approached by Chris back in 2011 to assess the situation with the conveyor pulleys at the quarry, and so we went out to the site to perform a survey. We listened to the problems that he was experiencing – basically the dust and rock were getting into the housings and the bearings, which was causing them to fail, and he was constantly changing them out,” says BSC sales representative Kelvin McCarron. “We shared some success stories that we had with other customers using the Timken® Spherical Roller Bearing Solid-Block Housed Units and recommended these for the Molong operation.”

On the basis of that recommendation, Cooke gave BSC the go ahead to trial the Timken® Spherical Roller Bearing Solid-Block Housed Units – formerly known as Blue Brute – on one of the site’s conveyors. To say Cooke was impressed with the result would be an understatement.

“He was over the moon with them,” enthuses McCarron. “After successfully trialling the first conveyor, he asked us to swap out the rest of the conveyor bearings at the site with the Timken® Spherical Roller Bearing Solid-Block Housed Units. It’s been nine years since we first installed those units and we’ve only just had to replace those that were used in the original trial. That’s a remarkable life for bearing units in this kind of application and environment.”

Known as industry leaders in heavy duty operating environments, the Timken® Spherical Roller Bearing Solid-Block Housed Units are specifically designed to withstand harsh conditions such as those typical to the Hanson Molong quarry operation. They are made from cast steel and can manage extreme loads and speed capacities in any radial direction. The bearing units also have multiple levels of sealing to protect them from contamination and maximise their operational life.

Importantly, the Timken® Spherical Roller Bearing Solid-Block Housed Units can run efficiently on misaligned shafts of up to ±1.5 degrees. This is due to the unique design of the extended inner ring, where the primary seals run. As most conveyor applications will experience structural misalignment, this can make a significant difference to a quarry’s productivity. Ordinarily, the sealing arrangement would be compromised during structural misalignment, which would then affect the life of the bearings. The Timken® Spherical Roller Bearing Solid-Block Housed Units, however, just keep on working.

“They’re good. They keep working and we are not losing any time due to bearing problems on the conveyors. That’s the performance we want,” asserts Cooke. “And they last.”

Moreover, McCarron points out that installation of the Timken® Spherical Roller Bearing Solid-Block Housed Units is considerably easier than with other conveyor bearings.

“The Timken® Spherical Roller Bearing Solid-Block Housed Units are supplied pre-assembled and ready to go. This eliminates the chances of contamination during set up,” he says.

Maintenance is easier too, and Cooke has also been proactive in improving maintenance access at the Molong site.

“Some of the bearings are hard to get to, so we installed grease lines to make them accessible from ground level,” he says. “The bearings have a purge feature so we can’t overfill them and they maintain their integrity and reliability.”

Overall, Cooke is very happy with both the Timken product as well as the service he receives from BSC. McCarron is out at the Molong site every week to replenish stores and also offer advice when needed.

“We’ve got such a broad range of product as well as a large pool of technical expertise, so we can help customers with a number of issues – for example we’re also helping design alternatives to the motors and gearboxes used at the Molong site to improve their efficiency.”