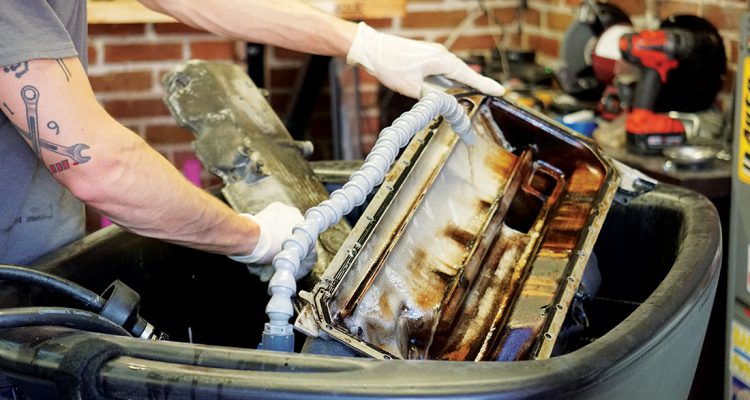 When a large Trans-Tasman dairy facility bought eight of CRC Industries’ SmartWasher Bioremediating Parts Washing System, they were able to eliminate the use of harsh solvent based cleaners alongside all the associated risks that come with them, reducing the company’s liability and achieving better cleaning efficiencies.

“Its just a matter of time before everyone goes down this path,” CRC Business Development Manager of the APAC region, Steve Colson, said.

“All the big guys use it, and that has a lot to do with simplifying work place OH&S compliancy”

“Customers were mostly driven to make the change to our SmartWasher because of bad reactions to parts washer solvents on their skin,” Colson said.

“With the SmartWasher, all you need is gloves, rather than the full gamut of chemical gloves, protective aprons and breathing devices.”

“Solvent based cleaners expose people to skin irritants and vapours, create toxic liquid waste and you end up trying to clean parts with a filthy liquid and then dispose of all that hazardous waste.”

The CRC SmartWasher uses a pH neutral, non-hazardous, non-flammable water-based cleaning solution, and allows for the washing of parts at a comfortable 42 degrees. It also exceeds standards in regards to the environment.

The SmartWasher has been named a ‘Safer Choice product’ by the US Environmental Protection Agency (EPA), a certification granted once all ingredients have been analysed in order to determine there are no harmful effects to humans.

Distributor of CRC Industries products, BSC has been supplying to the Food and Beverage Industry since 1921.

BSC’s National Product Manager, Lubricants, Steve Keown, says BSC “were right on board with this revolutionary component cleaning system from the get-go taking these units to some of Australia leading dairy, biscuit and raw produce processing plants.”

According to Keown, the facilities were drawn to the product because they take “climate responsibility” seriously and the CRC SmartWasher is an environmentally friendly product, which is something that the distributor – with its footprint of over 160 locations and 1,400 employees – also takes seriously.

“People want to use safer and more environmentally responsible parts washers and to show their customers they are dealing with waste responsibly,” he said.

Through the process of bioremediation, the SmartWasher is self-cleaning as well as safe to use. In this instance, bioremediation is the use of microbes to break down or neutralise hazardous substances and contaminants, removing dangerous chemicals in the environment.

Colson says that microbes are introduced every month to keep the SmartWasher  colony at optimal strength, breaking down cheese, chocolate and dairy fat. CRC Industies names its blend of nonpathogenic (harmless to humans) microbes in the SmartWasher system ‘Ozzy®’.

“Solvents attack deposits from the outside whereas a surfactant breaks the bond between the part and the dirt, so it lifts off rather than dissolves. That means the SmartWasher’s cleaning action looks different, but it can dislodge deposits some solvents won’t touch.”

Ozzy microbes also eats the potentially harmful waste in the SmartWasher and then transforms it into small quantities of harmless by-products of carbon dioxide and water, elimating the need for disposing mass amounts of used fluid, as well as being safe to use.

A similar process has been used in the clean up of dangerous oil spills, such as the Exxon Valdez oil spill in March of 1989 and the Gulf of Mexico oil spill in April 2010.

According to Colson, there is 3.3kg of inert solid waste to dispose of a year compared to 377kg of hazardous waste — plus disposal fees — for solvents changed every six weeks.

The SmartWasher compares favourably to simpler water-based units as well as the solvent cleaners. For example, there’s no need to change the liquid in a SmartWasher, just the filter mat once a month in order to keep the microbe colony strong and effective. The filter traps larger particles and the emulsified waste drops into the tank where microbes consume it at the rate of 1-2 litres per week.

The Ozzy formula has been refined and improved over the years, and CRC will continue to apply significant R&D to further enhance the product.