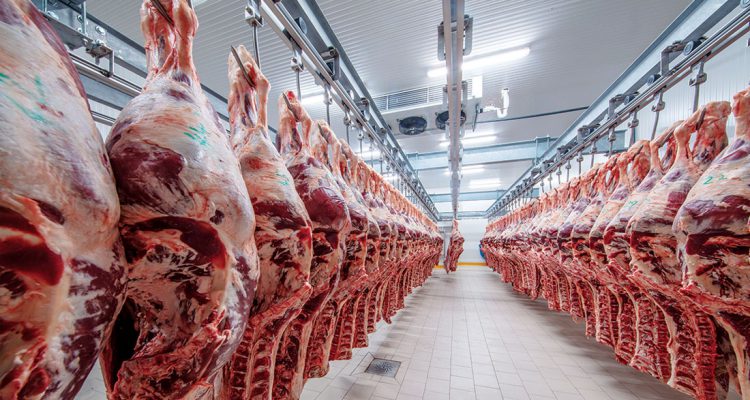 In many industrial operations, bearings are the lynchpin of a production line. In the context of a high-intensity operation such as an abattoir, a bearing must be designed to withstand an elevated level of requirements.

Mark Brocherie, Business development manager at BSC Bearings & Power Transmission, recently worked to install the Timken® Spherical Roller Bearing Solid-Block Housed Units in an abattoir. To gain an understanding of the role of bearings in an abattoir, Brocherie described the production line process.

This chain is then supported by sprockets, which are held into place by the Timken® Spherical Roller Bearing Solid-Block Housed Units.

“If one of these bearings fail, or if a housing is broken, it causes the line to stop, and if the line stops it causes costly downtime to the company. This downtime could range anywhere from 20 mins to 1 hour depending on the severity of the failure,” said Brocherie.

Abattoirs such as the one Brocherie described process over 1,000 head of cattle a day and require over 100 employees working on the floor. In this instance, any short period of down time has a significant cost to production. A bearing failure is a costly one, to be avoided wherever possible.

“If you’re a maintenance fitter on site, it’s important to get things back up and running as quickly as possible if there is a breakage,” said Brocherie. “Let’s say it takes them 20 minutes to fix, well, one hundred people standing around waiting for 20 minutes is a lot of money lost in wages.”

Bearings serve a fundamental purpose in such a facility, and a successful product has to be one designed with the environment of an abattoir-like facility in mind. Factories such as abattoirs need to be chemically cleaned on a daily basis and equipment has to be able to withstand this.

“The chemical products that are applied by the cleaning staff at the end of each day do come in direct contact with the bearings,” said Brocherie. “These chemicals can potentially have a detrimental effect on the life of the bearings.”

Bearings must be able to withstand this process, highlighted Brocherie.

“The use of the chemicals, coupled with the application of hot water from the high-pressure hose mean that the bearings are subject to severe conditions, and that’s all come into calculation with the Spherical Roller Bearing Solid-Block Housed Units from Timken®.”

The Timken® Spherical Roller Bearing Solid-Block Housed Units have built up a reputation in the meat processing industry and other heavy industrial sectors in their distinctive blue, cast steel housing, which comes preassembled as one singular product.

Unlike standard, SN bearings, which come with a split housing, the all-in-one steel housing avoids any outside contamination on the bearing itself. At the same time, this also prevents grease, which comes pre-filled in the bearing, from leaking out onto a production line.

In such a package, installation and repair is simplified, as Brocherie points out.

Brocherie estimates, based on trials he has run of the product, that instead of needing to be changed once a year, Timken® Spherical Roller Bearing Solid-Block Housed Units would only need to be replaced every two years, and take 10 minutes, rather than an hour, to fit and install.

“The overhanging chain support bearings are normally replaced in the plant every year – that also includes every seal, every adaptor sleeve, spacer ring – they’re pulling everything apart and fitting new bearings back in place,” said Brocherie.

The Timken® Spherical Roller Bearing Solid-Block Housed Units avoid the need for this extensive set-up, and do not require a fitter to use a feeler gauge to set the clearances.

“Industry in my eyes should be demanding a product like this,” said Brocherie. “Bearings have evolved and improved over recent years, and these benefits can be translated into immediate cost savings for the customer.”