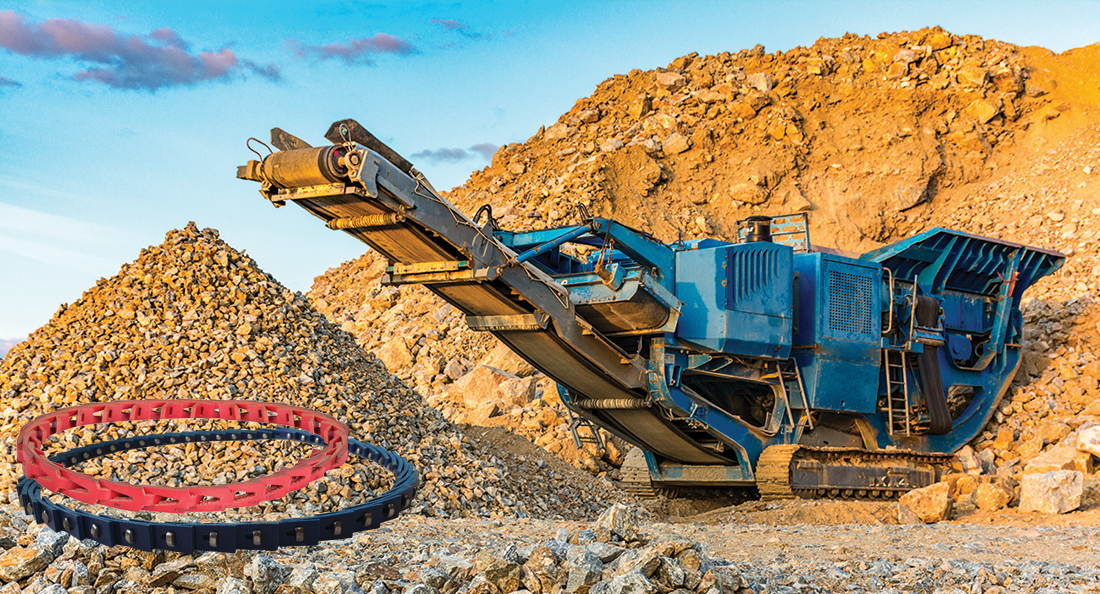 Rock crushers are used in mining to reduce the size of the broken ore down to fist size pieces. In the process, equipment is exposed to high levels of contamination from the rock and dust ingress, as well as heavy loads and vibration.

At a large Australian quarry site, a rock crusher relied on five conventional rubber v-belts with SPC wedge cross sections for power transmission. Because of the heavy ingress of rock particles, the belts tended to fail on average twice a month and required replacement. For each of those replacements, four people spent roughly four hours to dismantle the crusher and replace the belts.

BSC’s solution for this quarry site was to replace the conventional wrapped v-belts with Fenner Drive SuperTLink vbelts, which lasted up to 18 months. The unique ‘quick connect’ belt design meant the belts could be installed and replaced within just half an hour with the help of two maintenance staff.

The solution also led to significant reduction in the machine’s vibration, which by extension helped increase the bearing life in the equipment. The quarry project gained a cost saving of $27,000 within the first 18 months since replacing the belts.

“These belts are made from custom polyurethane elastomers reinforced with multiple plies of polyester fabric. The SuperTLink v-belts are engineered with the standard cross section as conventional rubber v-belts, which makes them suitable as a permanent upgrade for heavy-duty applications, including those in mining and quarry sites,” he says.

Other products in the Fenner Drive HPC product category include PowerTwist Plus and NuTLink v-belts, both of which are suitable for classical section drives. The SuperTLink v-belts are engineered to replace metric SP wedge belts of SPZ, SPA, SPB and SPC cross section.

A key advantage of HPC v-belts, according to Steve, is that they eliminate the need to change associated drive components when replacing the belts. The belts also provide easier and faster installation because of their unique design.

“There are no tools required
for installing Fenner Drive’s HPC v-belts. The belts are easily made up to the required length by hand and can be rolled onto a drive just like a bicycle chain.

“There is also no need to maintain inventory of numerous different rubber belts. A pack of SuperTLink will give you the ability to make several belts from a 20-metre roll, giving a significant reduction in working capital tied up in spares,” Steve says.

“The Fenner Drive QuickFix belt is designed to fit both v-belt and wedge-belt profiles. The belts are supplied in convenient five metre rolls which can be cut to length on site by the maintenance team. Having the belts available on site helps minimise downtime by keeping the operation going until the original belt is delivered to the site.”

Like all power transmission belts, Fenner Drives’ HPC v-belts may require re-tensioning after an initial ‘run in’ period. But, this is a lot simpler with SuperTLink belts than with conventional belts, Steve says.

“Re-tensioning the belts is very simple: Just roll the belt off, take out a link and roll it back on, no need to move any drive components.”

“SuperTLink do not have the continuous tension cords found in conventional v-belts. As a result, transmitted vibration in the drive system can be reduced by 50 per cent or more. Consequently, system noise is reduced and, as a bonus, bearing life extended.”